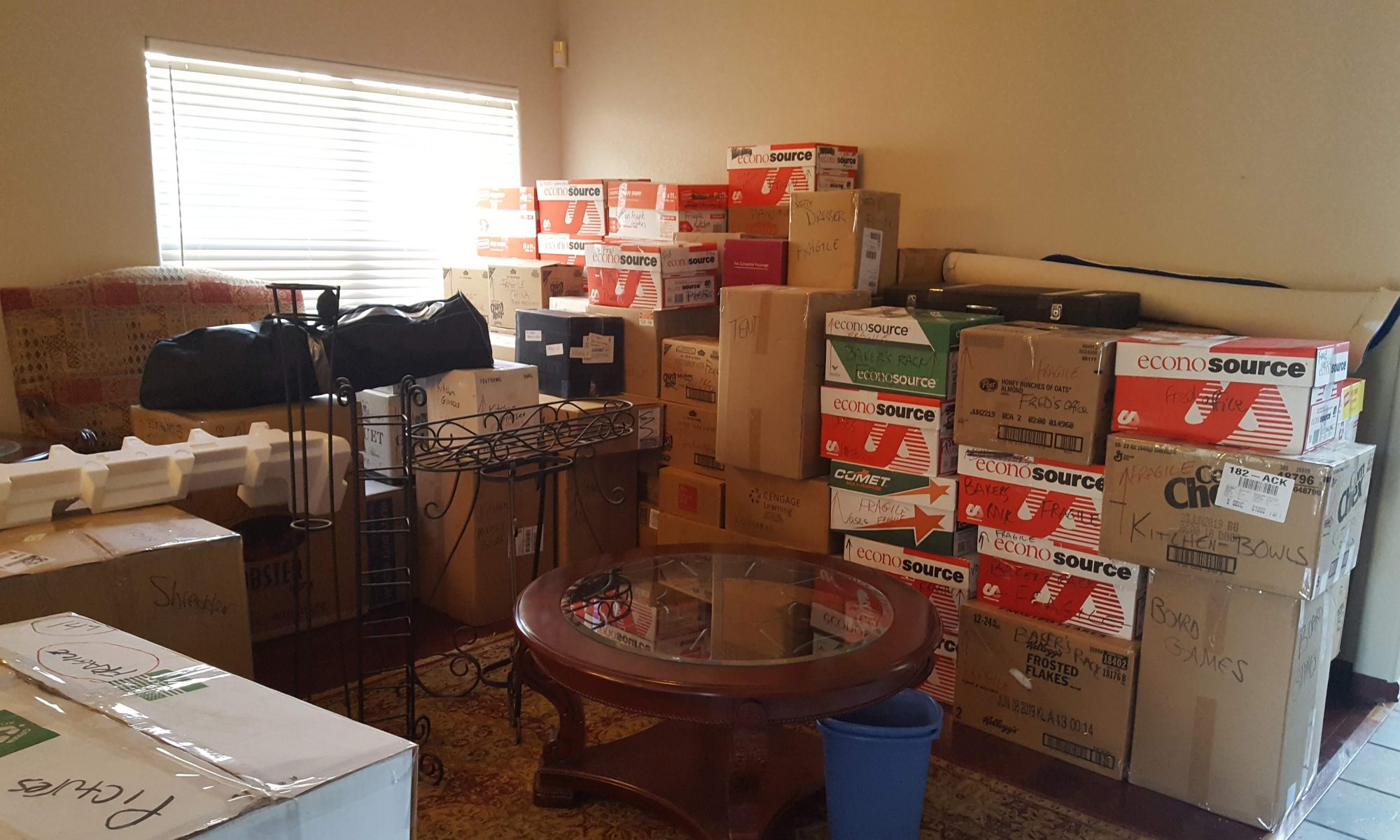 Shredder, lamp bases, frogs. That’s my favorite of the 151 labels I’ve written on boxes since I started packing back in June. For the last two months, I’ve been running up and down the stairs, lifting, sorting, tossing, carrying, wrapping, weighing, taping, and stacking every single thing my husband and I own.

Rusty has been watching me with his head tilted to the side. He is worried that I might pick him up, wrap him in newspaper, and throw him in a box labeled winter coats, wine chiller, dog. (And if you want to know why a person moving to Florida would have a box labeled winter coats in the first place, you are already beginning to understand what this process has been like for me.)

Rusty’s distress aside, I’m now happy to report that the movers will be here in a few days, and we are ready. I hadn’t planned to stop posting essays while I packed, but once packing was underway, I couldn’t sit still long enough to complete anything that wasn’t going to end up swaddled in cardboard.

I like to think I was just listening to my old friend Rilke. He says, “You ought to wait and gather sense and sweetness for a whole lifetime, and a long one if possible, and then, at the very end, you might perhaps be able to write ten good lines.”

I don’t know if I’ll pull off ten good lines here, but I do feel like I have been packing for a whole lifetime. Perhaps I’ve even gained a little sense and sweetness. Here is what I’ve learned while my blog was dark.

ONE: I can only be single-minded about one thing at a time.

What’s that thing that’s the opposite of an oxymoron called again? Oh, right, a tautology. That heading I just wrote fits perfectly, because the term single-minded already means one thing. But believe me, it takes more than a tight tautology to convince me that I can’t finish a paid writing project, prepare two Sunday’s worth of music to play in public, write a guest post for another blog, and keep posting on my own blog while I single-mindedly stuff 3,500 hundred square feet of house into 151 cardboard containers.

Nope, what it takes is exhaustion, sore feet, sore hands, a few tears, and a few dozen eye-rolls from Fred. Things got better when I realized I could just stop doing everything else for a while. (I offer this as a cautionary tale–if you are like me, you will conclude that unlike me, you have what it takes to pull off doing everything at once. To you I say, “Hello, kindred spirit.” We can talk again when you reach the other side.)

Two: I should have been great at Tetris.

Remember Tetris? All those little Ls and Ts and squares fall from the sky, and your job is to stack them into a perfectly filled-in wall. My step-daughter is great at it. No amount of practice could make me good at that game. I just played for free online and confirmed that I’m still terrible at it.

And yet, if I do say so myself, I am a ninja when it comes to packing. That tiny empty space at the top of the box of kitchen bowls? It would be the perfect size for my mother’s old music box. That square wooden Cathy’s Kitchen sign (my mother’s again)? That will fit perfectly to reinforce the bottom of the box with the pots and pans. In perhaps my finest ninja moment, I emptied the third roll of packing tape and realized that the cardboard ring inside would perfectly protect the little glass globe my parents brought from Italy.

Don’t even get me started on tearing off the perfect size piece of bubble wrap for every picture. I’m telling you, if this writing gig doesn’t pan out, I’ve got options.

To be fair, I should mention that Fred has a ninja packing skill of his own. He can smell an empty cardboard box from three streets away, and charm grocery stockers, gutter shop owners, and my favorite winery into passing them along. Of those 151 boxes, I think we paid for three.

Three: The gap between what I have and what I need is immense.

I probably should say obscene, but being that honest might compel me to take more action than I’m ready to take. Ever since I packed up the kitchen, we’ve been living just fine with one skillet, one 2-quart pot for boiling water, and one French press coffee pot. If you look in the boxes you’ll find something like twenty-two pots and skillets. (I didn’t count them, but I’m not exaggerating and I’m a little afraid that I might be undercounting.)

And for the record, I found that barely used French press tucked deep in a cabinet behind some dried out bandaids as I fretted about packing my real coffee pot, the one that grinds the beans and has my coffee ready for me when I wake up in the morning.

I could go on and on: clothes, shoes, books, vases, tools, even underwear. I have too much of all of them.  It’s sobering to pile up all the evidence of your excess in boxes in the living room. One night I was talking to my sister and Clare told me that she came to this same realization  when she was packing for her own recent move. She said she found herself crying at the size of the job, until she realized that it was ridiculous to be crying because she had too much.

While I haven’t gotten rid of anywhere near as much as I should have, Clare’s words have helped me keep this work in perspective.

Four: One thing empties another.

I started packing the same way I start every big task. I made a giant list of every area in the house I’d need to pack. It included things like “upstairs hall closet, loft, upstairs master bedroom, closet under the stairs, china cabinet, bookshelves…” and so on.

I love lists. I’m one of those people who adds things to my to-do list after I’ve completed them just so I can enjoy the satisfaction of crossing them off. This list, though, wasn’t working. For weeks and weeks, I couldn’t cross anything off. I’d start emptying the hall closet, and before I knew it, I was running to my bedroom for a sweatshirt to wrap around a tennis racket. I’d find myself needing some stuffing to keep the mugs from rattling around, so I’d head to my sock drawer. Towels dribbled out of linen closets; shoes and plastic hangers filled gaps in boxes of lamp bases and tools.

I kept complaining to friends and family that everything was in process and nothing was getting done.

Then one day, Fred and I walked around the house opening closets and tugging on drawers, and there wasn’t anything in them. Somehow we’d packed up the house without ever crossing anything off the list.

One thing empties another. I feel like there’s a lesson in there somewhere.

Five: Packing tricks you into thinking you can take it with you.

One gentle Tuesday a few weeks ago, my packing had a sound track. Aurora, the violin-playing-gymnast grandchild, is learning to play guitar. She doesn’t learn a new instrument the way I would, by buying books and obsessing over understanding every little detail.

“What are the notes for each string?” I ask her. “I don’t know,” she shrugs. She’s just learning to play one song, gently, beautifully, confidently. This morning she plays the first eight bars of “Here Comes the Sun” over and over again while I pull plates and bowls out of kitchen cabinets, wrap them in newspapers, and seal them into cardboard boxes.

It’s a gentle morning, and Aurora’s playing is light and lovely. She and I have been playing music together since she was a tiny kid who wouldn’t talk and wanted violin lessons. In a few minutes we’ll both stop and slice some strawberries for lunch. In a few weeks, she’ll start high school. She is on a mission to finish in three years. In a few months, I’ll move.

Right now, though, I’m savoring this moment standing in the kitchen. I’m not thinking about where either of us is headed tomorrow. “Here comes the sun,” the music sings again and again.

I keep wrapping plates, surprised by how easy it is to believe.

Thanks for coming back! If you enjoyed this post, please feel free to pass it on and tell a friend about LiveLoveLeave. If all goes well, I’ll be back in a week.