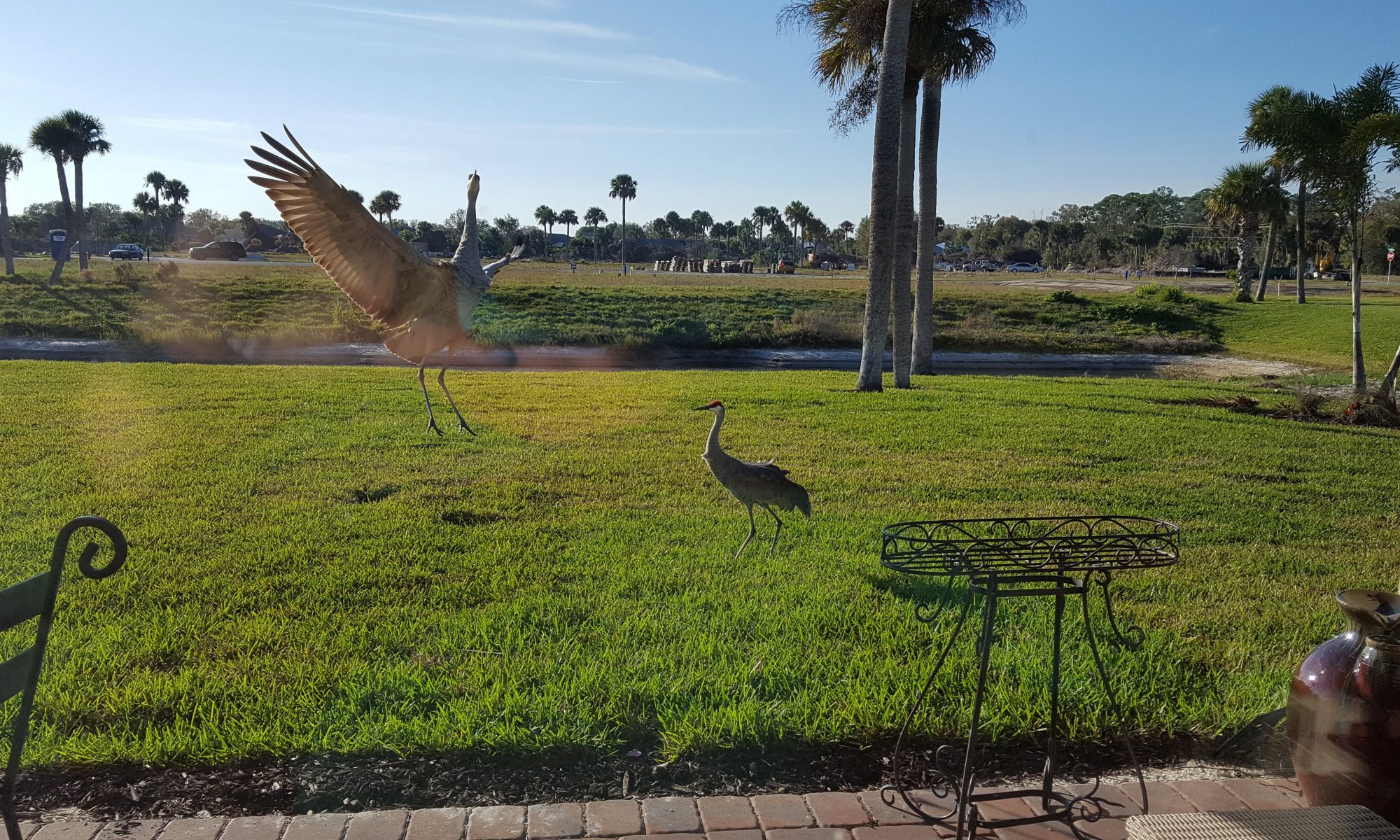 The cranes came back today.

I don’t mean the way they used to come back to Albuquerque in the fall, huge gobbling flocks settling in fields along the Rio Grande for the winter.  I mean the two cranes who made themselves at home on our lanai last weekend. They came back this afternoon for another visit.

I feel like I’m starting to know them. The smaller one is the more curious of the pair. She pecks at the wicker furniture and plays with the strings on the cushions on the pub chair. When she starts tugging at the fibers in the rug, Fred makes a sharp “Ack” sound. She looks up, more annoyed than startled, but she stops ruining the rug and goes back to tossing the mulch around. Just like that, cross-species communication.

The bigger crane stands still. He strikes and holds one long graceful pose after another while I grab my cell phone and start taking pictures through the sliding glass doors.

Before the cranes came,

I was having the same sort of ordinary, meandering day I’ve had lots of since we set off on this mad adventure. We hung blinds in my office, answered the door to people who were showing up to fix problems that weren’t fixed before we closed on the house, and put up a few final pictures.  We were just headed out to shop for curtain rods when the cranes came.

I put my purse down and stopped to watch them. I have the sort of life, for the moment, that lets me stop everything when a couple of giant birds tap on my back door. We watched them until they wandered off toward the neighbor’s yard.

This morning I’m sitting at my desk

writing about the cranes and freezing a little. I know that some of you are up to your necks in snow and I’m in Florida, but it’s 52 degrees here right now, and every window and door in my house is standing wide open.

That’s another story, but because the windows are open, I hear the cranes when they fly over. I imagine this neighborhood was their home long before it became mine.

I’m trying to figure out why the cranes matter.

I’ve reached that all-too-familiar point where I start wondering why you should bother spending your time reading about this one small moment of beauty in far-away Florida.

One thing I’ve learned, though, since I started showing up to write every day, is that an answer to that question will come. It’s sort of an inverse Field of Dreams thing. If I come, they will build it. Only in this case, “they” aren’t a handful of old ball-players with unfinished dreams. In fact, I have no idea who or what they are. Some mysterious force creates moments that rub up against other moments to help me make sense of the world. I can’t explain it, I just know that it’s true.

For a moment, I thought that maybe the point was that recently, people have been cutting down trees and otherwise vandalizing Joshua Tree National Park. It’s a heartbreaking development in a world that already has more than enough sadness to go around. Maybe the cranes are here to offer a tiny counter-weight to the sort of anger or self-loathing that lets a person destroy something beautiful just because they can.

I don’t know. I had just decided that idea didn’t quite capture what I was feeling when I hit “command x.” Somehow instead of deleting a word, I deleted everything but the first few sentences I had written. Maybe, I thought, as I started over, the cranes matter because they teach impermanence, that there is a wide world beyond our control.

I’m not sure that’s the whole point either,

but I think I’m closing in. I did what I usually do when I’m getting close and googled crane poems.  Stephen Crane (remember high school and The Red Badge of Courage?) made me laugh by topping the list. I didn’t even know he wrote poems.

Then I found one called “Should the Wide World Roll Away” and, intrigued by the title, had to read the rest of it. At first I thought I’d leave you to follow the link yourself, but I realized I was ruining the poem by trying to paraphrase it, so here’s the whole thing:

Should the wide world roll away
Leaving black terror
Limitless night,
Nor God, nor man, nor place to stand
Would be to me essential
If thou and thy white arms were there
And the fall to doom a long way.

It’s the first and last lines that crack me open. Sometimes lately it does feel as though this “wide world” is rolling wildly away. I’m reminded of the moments that caused me to start writing this blog in the first place, the crazy contradiction that living inescapably leads to dying, and yet, love makes it all matter.

I’m still wrapping my head and heart around those ideas, but in the 27th year of our marriage, Fred and I leapt out of our support systems and stepped out into a wide new world. It matters that the cranes come.

In the poem, Crane doesn’t ask the person he loves to stop the world from rolling away. He just hopes that their inevitable “fall to doom” lasts a good long time.

Love can do that.

I almost forgot to tell you one last thing about the cranes. The picture at the top (shot through the back door) doesn’t do it justice. But not long before the cranes flew off yesterday, the still crane started dancing.

As always, if you found something uplifting or interesting here, please feel free to share this post with your friends. In this new year, I wish you space to enjoy the beautiful moments when they come. Thanks for reading!

One Reply to “Cranes in the Wide World”