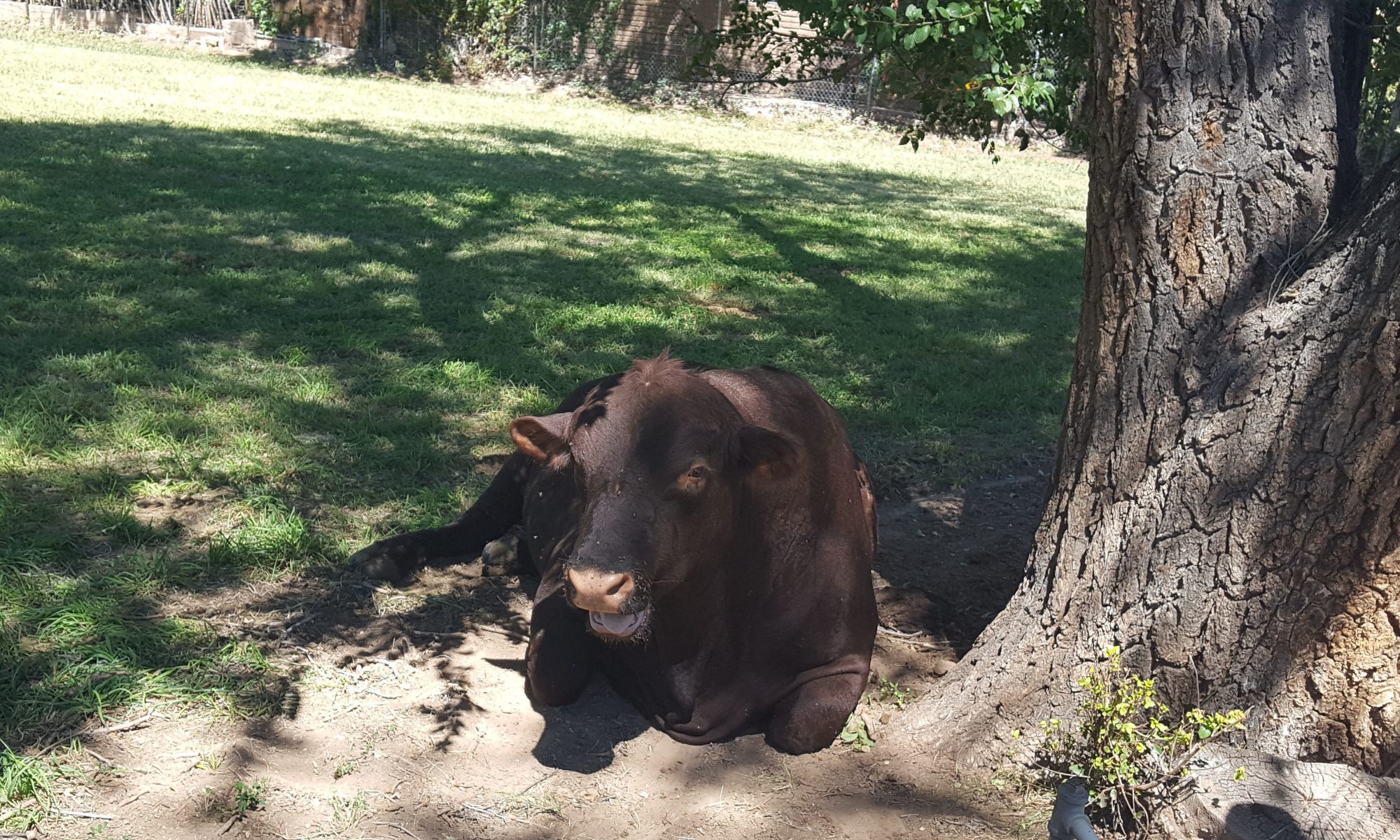 Picture a little kid’s drawing of a house: at its simplest, a triangle perches on top of a square.  Then imagine the kid with the crayon getting restless.  She stretches the square into a long skinny rectangle and topples the triangle over the edge. The triangle lands in the rocks next to the rectangle and turns the little house into an arrow.

You can’t get comfortable in an arrow. We sold that house and decided to head off in the direction the the arrow was pointing. We moved in temporarily with my friend Ken in the North Valley and gave our granddaughter one of our cars. That’s why I’m walking down Guadalupe Trail this morning, past some cows and a singing pyracantha hedge full of invisible birds.

I’m looking for the little half-sized road that will take me to the ditch bank. Among the many gifts of spending the last  six week’s as guests in my friend’s house has been the chance to fall in love with this little stretch of Albuquerque’s North Valley.

that never happened on the West Side. A few days ago a woman wandered into the yard with her beagle. She wanted to know if I had lost a turtle.  When I said no, she left and came back a few minutes later with the turtle she had found wandering in the road. “I’ll just leave him here anyway,” she said.

Ok. It’s a nice yard for a turtle. It had a neon pink Z painted on its shell. I watched him lug his prehistoric body around the garden until I lost sight of him between the flagstone path and the chamisa.

It’s not just that strangers bring you turtles in the North Valley. The other night Rusty wasn’t feeling well, and I found myself curled in a blanket, sitting in a rocker on the front porch at 2:30 in the morning. It was peaceful in the cool dark, and I felt almost lucky that I’d been drawn out of bed.  Rusty, instantly calmer in the fresh air, went to sleep at my feet while I rocked and daydreamed.

We might have stayed there all night if I hadn’t heard something breathing. It was a deep, grunting, wild noise, followed by some serious rustling in the garden.  For no reason that holds up to daylight, I imagined a wild boar, its giant tusks angling for the kill. I woke Rusty and hustled him inside, wondering what feral beast was sniffing for us in the night.

To the best of my knowledge, there’s never been a wild boar sighting in the North Valley. In the rational light of morning, I see the holes in the grass, each one the size and shape of a skunk’s nose.

In the North Valley

I’m remembering how much I enjoy walking. Not just to walk, but to get somewhere. This morning the cows are out as I head South on Guadalupe Trail. I count four of them, with the biggest leaning against a cottonwood just beside the road. He looks at me without much curiosity and swishes flies with his tail.

When I get to the ditch,  I hang a right and then another one at the no trespassing sign and suddenly I’ve left streets behind. I’m walking beside an arroyo, flush with flowing water. Old land rights still dictate when farmers may open simple wooden gates to flood their fields. Sunlight dapples my arms as it sifts through cottonwood branches and lands in shards on the dry ground.

I bend to pass through the first stile, alarming a lizard that skitters up the fence post. A coyote appears about ten yards up the trail. He looks at me and prances ahead, then turns back, keeping a constant distance between us. Somewhere to the east on the other side of the ditch a rooster crows.

I step through the second stile. It’s morning in the North Valley, and I’m walking in an older version of the world. I was going to say I’m not at work, but I don’t think that’s true. My new work life is a little bit like a jigsaw puzzle before you get the edge pieces done–I’m still figuring out what will go inside. “Whose woods these are I think I know,” is running through my head. Who’s to say walking through the bosque on a sunny morning doesn’t count as work, if you’re trying to make a life  as a writer?

Just before the coffee shop,

the dirt turns back into pavement. The house on the corner marks the transition. Long skinny garden beds separate the house from the road. Signs are painted on water drums and fence posts and compost bins.  “Be joyful,” “Be You,” “Sit here and enjoy the new.” A few weeks ago, the sunflowers were blooming and the vines were heavy with tomatoes.

I turn toward Rio Grande and have coffee with my friend. On my way home, I pass the yard with the painted bench again. I’ve been trying to decide if it says enjoy the new or enjoy the now. A young man is working among the plants this morning, and I think about asking him. I say hello and thanks and tell him how much I enjoy walking by his garden.

“You’re welcome,” he says, “Would you like a zucchini?” And just like that, he pulls a knife from his pocket, cuts the long, thick fruit from the vine, and hands me a zucchini. I decide I don’t want to know if he wants me to enjoy the new or the now.

I walk home with my zucchini.  It’s just another morning in the North Valley.

As always, feel free to share this post with your friends and invite them to visit LiveLoveLeave.