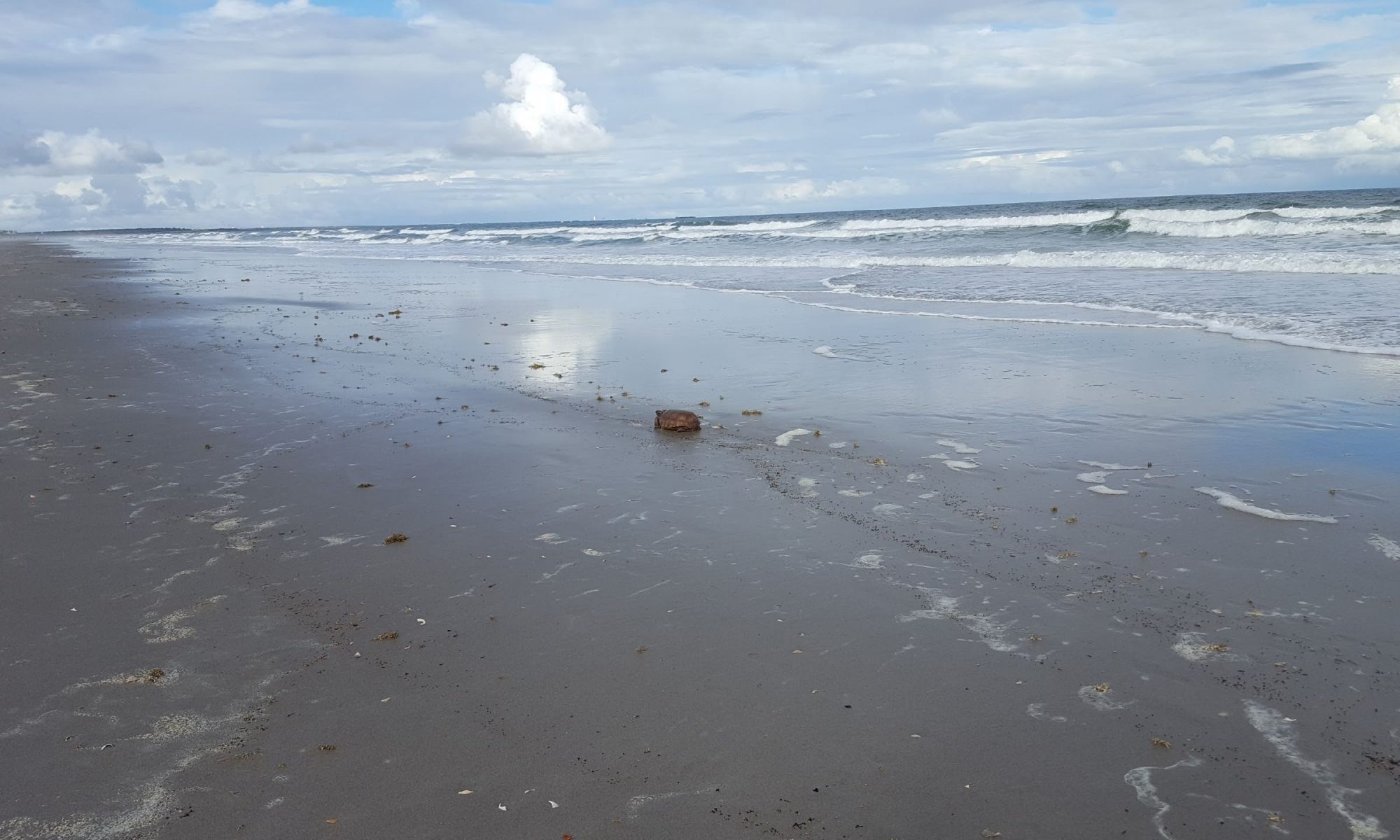 I’m trying to sort out the birds. It’s not like I’ve never been to the ocean before; it’s that this is the first time I’ve ever been here with the intention of starting a long term relationship. I don’t want to start off with a lie.

A few evenings ago when the little white bird with the black legs (who might be a plover?) yanked a ghost crab (I’m fairly sure about that one) from the swash, he ran up the shore into the wrack and tried to find a nice quiet table for dinner.

No such luck. The brown bird with the long legs and the long beak (perhaps a willet?) started chasing him. Up the beach, down the beach, into the water. Every now and then a few other birds that might also be plovers joined in the chase.

I must have watched this dinner dance for ten minutes. Finally the bird that was the best at fishing gave up and tossed the remains of the crab on the sand. I expected the long-beaked bird to run in and grab the crab, but nobody came. Apparently all that drama was just about the chase.

The other brown bird that looks like an overgrown sparrow on orange stilts (that might be a sandpiper?) played no part in this story.

These things happened as I’ve told them. This is a true story. I was there. I watched it happen, and then I wrote it down.

what this has to do with Daniel Dale, a journalist from the The Toronto Star. Then again, maybe you weren’t wondering that. Maybe that was just me. Either way, a tweet from NPR popped up while I was writing. In it, Dale was explaining why, when the guy we put in the White House just makes something up, Dale uses the word “lie” in his reporting.

It’s a complex argument but I’ll try to simplify it for you. (Actually, that last sentence is a lie. It’s still as simple as it was when your mom explained it to you in kindergarten.) If you make something up and tell people it is true, you are lying.

Call it a “definitional thing,” if we need to pretend it’s complicated. Dale’s bigger point is that if you are a major newspaper (he’s looking at you, New York Times), and you don’t use the word “lie” to describe a lie, you are, well, how can I say this…you are lying.

On a day when pipe bombs are flying around the country, I would have loved to tell you that the little bird that might be a plover caught a crab and the other birds cheered and they all shared the crab and lived happily ever after. That would have been a nice uplifting story, but it wouldn’t have been true.

Likewise, if I had said that the bird that might be a willet had flown across the border from Honduras planning to kill Americans, that would have been a lie, too. (See how easy?)

what this has to do with vultures on the beach. This afternoon when Fred and I were walking along the beach, I saw three huge blackish-brown birds gathered on the beach above the scarp. Before a passer-by told me they were vultures (with a gently implied “duh” and a nod to their naked heads), I was planning to tell you that I had seen beach turkeys. Actually, I was trying out both “beach turkeys” and “sea turkeys” in my head.

Most of the time, I find it’s not all that hard not to lie.

Anyway, the vultures are on the beach because Red Tide is here in Brevard County. That means there are dead things on the beach, and vultures eat dead things.  I watched while a vulture dug in the sand and pulled out a dead fish and ate it calmly while his buddy vulture looked on politely.

where I’m going with this little collection of true stories from the beach, and I can assure you that you are not alone. I snapped a few photos of the vultures to prove they were there, then Fred and I continued on toward the pier.

Here in Cocoa Beach, sea turtles nest in the dunes. If you live along the beach, during turtle nesting season you have to turn off your lights or close your blinds at night so the turtles don’t think your light is the moon. The moonlight on the water draws the turtles into to the sea.

I find that fact to be both beautiful and true.

So this afternoon, while pipe bombs were flying around the country, an algae bloom was poisoning fish and gumming up the seafoam, and vultures with good table manners were digging in the sand, Fred and I kept walking toward the pier.

We hadn’t gone far before we saw the turtle, lugging her heavy body toward the sea. She lumbered through wet sand, a small crowd of beachcombers snapping photos and quietly cheering her on.

The “duh” woman  appeared at my side. “There’s so much life here!” she marveled. She was right. That was a true statement.

how I’m going to tie these true stories from the beach together and draw this essay to a close. Again, let me assure you that you are not alone.

It’s just that I think it matters to learn the names of the birds, to be diligent in calling things what they are.

Yesterday I saw a news clip where the guy who lives in the White House claimed that Democrats are trying to get rid of coverage for pre-existing conditions (one of which I have) and Republicans are trying to protect that coverage.

That is a lie.

It’s driving me crazy. A vulture isn’t a willet isn’t a sea turtle. Anyone who tells you otherwise is lying.

As always, if you enjoyed this post, feel free to share it and tell your friends to check out LiveLoveLeave. If you didn’t enjoy it, don’t tell them that you did. That would be lying.

2 Replies to “No Lie: Vultures on the Beach”