Last time I wrote it was advent, and I was waiting for the light to come.

Tonight I’m outside in the front yard, coaxing the light in. Fred is spacing the paper bags evenly along the sidewalk and driveway. I’m setting the candles upright, grounding them in the sand, making sure the wicks are ready to catch a flame. Neighbors who walk and drive by silently most nights are stopping to shout “Merry Christmas!” as their curious dogs look on. There’s something old fashioned and magical about these little bags of sand and light. 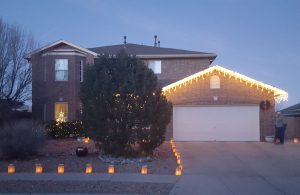 They make me think of Pittsburgh. In  the neighborhood in the South Hills where I grew up, every house lined the road on Christmas Eve. The Shamrock Manor Women’s Club took orders every fall and dropped off sand and bags and candles as the holiday approached. On cold Christmas Eves, after we’d opened the gifts from the siblings, my father and brothers would put on heavy coats and strike their flimsy matches against the wind and dark.

Later, as we drove to my grandmother’s house and then to midnight mass, the world would be transformed. Luminaria decorated the hills like chains of earthbound stars. We’d sing Christmas carols in the car and go silent as we entered the darkened chuch.

That church is a gym now. My parents are gone. All of my aunts and uncles, two of my siblings, and a few of my cousins have passed beyond this earthly light as well. I’m thinking about them tonight,  dipping my hand into each bag, holding the flame at the end of my lighter against the wick until I see it swell.

I’m remembering one especially sad lunch with my parents. My father was already ill with cancer; my mother was overwhelmed by the thought of that loss, beginning her long slide into dementia. Soup and breadsticks were one of the few foods they could both still enjoy, so we had come to Olive Garden for lunch. The light was gray outside the windows and the trees were bare.

“What if none of it is true?” my mother wondered.

She was thinking about another life, a life they might share after they shed their aging bodies and met again in some promised, airy beyond.

I was thinking about how true it had all been already, how the spring had returned and refilled the branches every year, how the luminaria had stayed lit in the snow, how my parents’ love, swelling like two flames into one, had lit my childhood.

This year it hit sixty degrees on Christmas Eve in Albuquerque and the luminaria burned all night.  Christmas afternoon, a column of  sun poured through our dining room window like the beam from a light saber. All afternoon, this wide cone of light traced a path through the blinds, across the orchid on the table, past the Christmas tree, and into the hall. 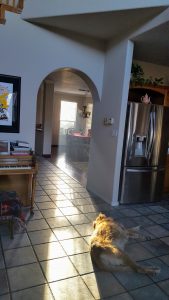 Rusty felt it first, and went to lie in the glow.

I saw it while I was on the phone with my sister, miles away in Ohio.  It outshone the lights on the Christmas tree, which shrank back into the branches, recognizing that this wasn’t their time to glow.

A little while later, Fred came in.

“Look at that light,” he said, walking into the family room from his office. “I’ve never seen it quite like that before.” 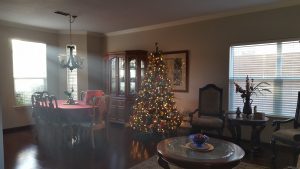 I have been thinking about light a lot this Christmas season. Ever since Thanksgiving,  I’ve been enjoying the lights on my neighbors’ houses. The neighborhood is aglow with snowflakes, twinkling laser shows, a Santa Claus pig, and simple strings of colored bulbs hanging from the eaves. I like these little stands against the darkness; these tiny blinking beacons shouting into the night.

Recently as I was thinking about how hard churchgoers have worked to turn a religion born out of love and an explicit rejection of power into a hierarchical system hungry for power at any cost, I read an article that mentioned that Buddhism isn’t a religion, it’s a practice. It made me think about the weeks I used to spend with students at the Bodhi Manda Zen Center in the Jemez mountains. Once a year for a bunch of years I’d travel to the center with a group of eager teenagers.

We’d rise at dawn, don our robes, and sit zazen in the zendo. We’d breathe in and out until we’d pulled the light over the edge of the mountains. After breakfast on those cold mornings I’d take my coffee and stand by the river, imagining what it would be like to let the cycle of light sculpt my days. I’m wondering what the world would be like if more people treated Christianity as a practice, as a simple way of being light in the world.

On nights like tonight when the moon is small, I carry a flashlight when I walk Rusty in the evening. There’s a dark patch where the road loops behind my house, a wild space where the street dead ends into the mesa. If I’m carrying a tiny circle of light,  I move through it without looking over my shoulder, without listening for footsteps in the rustling  leaves.

Sometimes I think it is all real. Sometimes I think that the birds are the heavenly hosts, swooping in to warn us, singing to bring us joy, dancing on the wind to outline the breath of a holy spirit.

Sometimes on a quiet Christmas afternoon when the planet tilts just right, I walk into my living room and see a solid column of light.

Sometimes when I strike a match and light a candle I am certain that light has an edge; that fire will always find a way to outshine the darkness.

Sometimes when the  year has been full of aggressive shadows, when it has seemed like the darkness is swelling, I can toss a candle into a paper bag of sand.  I can strike a match, touch it to the wick, and watch the flame swell, as it passes from one torch to another.

Sometimes in Pittsburgh, rays of winter light would catch in the bare branches outside my parents’ kitchen window.

I can see it now, that light that stretches across time and distance. See how it chases away the darkness; see how it warms me still.