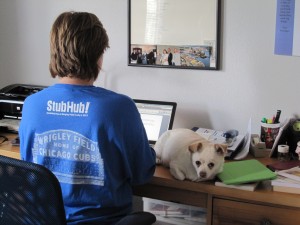 This morning as I write, a little barrel-shaped white dog is sitting on my desk. Her tail is curled across the edge of my laptop, and she is calmly surveying the scene behind me. In other words, she’s got my back.

Officially, her name is Snow White, which is the same name that her predecessor (a little white cat) had, but we call her Little Dog, because she’s about a tenth of the size of Rusty, who we call Big Dog when Little Dog comes to stay. We’re dog-sitting.

A few weeks ago, I was eating breakfast when I heard a persistent squeaky chirp outside. I listened for a little while, not sure whether it was a bird or something that needed tightening on the porch swing.

When I finally got up to look, I saw a robin hopping around, picking up juniper berries and rose hips from the rocks. The bird would pick up a berry, knock it on the ground a few times, and then hop over to the little spot of shade by the wall. There, the source of the squeaky chirp would open his mouth wide and wait for the big bird to drop the food in.

The funny thing was that the little bird with the wide mouth was almost as big as the big bird. Its breast was more speckley than red, and it was easy to imagine him as a chubby little kid. I am not an expert on how to raise a robin, so I laughed when I found myself thinking, “Isn’t that bird big enough to get his own food?”

I watched them eat breakfast until Big Dog lumbered out his dog-door and scared them away.

In July in Albuquerque the sky does somersaults. If you turn in a slow circle on a wild day you’ll see clear blue over the mesa, towering white cumulous over the south valley, dark gray storm clouds teasing the mountain, rain falling in Placitas, and way off in the distance, virga, that broken promise of rain that evaporates before it hits the ground.

The other night driving to a baseball game, I saw a fully formed sculpture in the sky. I looked up, and it was as though I were standing in a museum. Back-lit against the horizon laughed a white marble cherub, rivaling any you might see in a Renaissance collection. A few nights later, driving west just before sunset across the Montano Bridge, it happened again. This time I saw the carved bust of a beautiful woman.

I’ve been searching for links online that might give a sense of what I saw. This National Gallery of Art image of the work of  Tullio Lombardo comes closest.

My mother delighted in ordinary things, so it wasn’t unusual for us to look for faces and shapes in the clouds. “Look at the sailboat!” she might exclaim as walked onto the front porch, or “Ooh, do you see that old woman?”

These sculptures, though, are different. I wasn’t looking for anything when they appeared; I just glanced up and there they were, solid and luminous in the summer sky.

Last week, we traveled to Cocoa Beach, Florida, to visit one of my dearest friends. While there, I spent two mornings standing in the Banana River, really a salt lagoon, staring at manatees. At least a dozen of these giant sea creatures swam all around me, sometimes mere inches away, for hours. One came right up to me, flipped onto his back, and lay there gently flapping his flippers. Another, whose back was more barnacled than the others, kept swimming by my knees underwater, but wouldn’t surface until he was about ten feet away. Often I didn’t even see him coming; I’d suddenly sense movement in the water, look down, and he’d be there. Another swam up with her baby and nudged him up for air by my knees; I had the distinct sense that she was showing him off.

The next morning when I went back, the manatees were back, too, and we did the whole thing again.

The longer I’ve lived in the desert, the more each trip to the ocean has come to feel like a sacrament. I’m gripped by the urge to see and to name every feature of this watery creation. On our first day, we saw laughing gulls, royal terns, skimmers, American oystercatchers, a white ibis, lots of pelicans, and a strange new bird that looked like what you might get if you crossed a vulture with a flamingo.

From a distance, wood storks are tall and elegant. White wings the birds fold around themselves like robes hunch solemnly atop long, dark legs, giving them the gravitas of old-time dons. This scholarly air is enhanced by their bald, reptilian heads.

My husband and friend head into the restaurant while I stay behind, taking pictures and talking to the birds. Eventually I turn away and join people I love in the known world for happy hour at Fish Lips.

As I’ve been writing, Little Dog has relocated to my lap, so now I’m typing tilted to the right, with my left elbow up in the air and resting on her head.  At the beach, we watched a crow take funny, lurching side-steps into the water, as though he were climbing over things we couldn’t see; that’s how I’m moving now, as I shift and reposition myself around the thick skein of fur trying to get comfortable in my lap.

Reading other people’s writing, I’ve always believed that using asterisks between paragraphs to separate ideas was a cop-out; a shortcut writers use instead of finding and making evident the connections between one idea and another.

Playing with this technique myself, I suspect I’m  right.

When I went to the post office to stop our mail before the trip, the woman in front of me was buying stamps. The postal worker fanned her choices on the counter. “Are those Forever stamps?” she asked. He answered yes each time she picked up a different booklet and repeated the same question.

“Oh,” she responded. “And how long are they good for?”

He paused a moment, while she fingered the stamps and the question grew heavy around us.

Last night lightening ricocheted around the sky for hours, and thunder chased Little Dog far under the bed. I stayed up watching the sky explode until I couldn’t stay awake any longer. This morning dawned soft, and blue, and humid.

I’m trying to say that I love it here.

I’m trying to say that some days creation flops into view like a fish leaping in the Banana River and laughs at us for trying so hard to understand.

I’m trying to say that some days it is exactly enough to open my eyes in a wet world, to breathe salt air, to bask in a planet at play.