In honor of the weekend’s Women’s Marches, I thought I’d take a moment to say that Olympic gymnasts are tough.  Pound for pound, I’d put them up there with those crocodile-eating leopards that are all over my Facebook feed this week.  In fact, as my students would say, Aly Raisman is tough af.

In case you missed it, here’s what Raisman, two-time gold medal winning Olympian, had to say to Larry Nassar, the “physician” responsible for sexually abusing US Olympic gymnasts and University of Michigan crew team members for two decades.  (Let that “two decades” number sink in. I’ll get back to it in a bit.)

Looking right at the man who groomed young girls to gain their confidence so he could abuse them, Raisman said,  “Larry, you do realize now that we, this group of women you so heartlessly abused over such a long period of time, are now a force and you are nothing.”

This Larry that Aly Raisman was staring down is not only the man who spent his career assaulting young women while pretending to “treat” them. He is also the man who wrote the judge a letter explaining it was too hard on him to listen to the women’s testimony.

I heard this story Friday afternoon from my husband, who told me that the judge had laughed at Nassar’s request and told him to get over it. My first question was, “Is the judge a woman?”

I don’t blame him for that. Every year I do a little writing experiment with my students. I stole this from another teacher many years ago, and it’s fascinating. Without explaining what you are doing, you give the students a list of characters defined only by their job title (doctor, lawyer, nurse, etc). You tell them the characters are waiting outside a courtroom and then have them write a short scene.

The point of the exercise is to see how students assign the sex of the characters to the different professions. In 2016, 69% of my students made the judge male. In other high-powered professions, attorneys were 79% male and physicians came in at 84%. The teachers and nurses in the story were predictably female. The teacher I stole this exercise from provided data showing that in 1987 and 1997, the judges in the story were 100% male.

That’s all just a long way of telling you that I don’t blame Fred for thinking the judge was a man. I was skeptical, of course, so I looked up the story. Sure enough,  Judge Rosemarie Aquilina is all woman. Not only that, she “became part of Michigan’s history by becoming the first female JAG Officer in the Michigan Army National Guard.”

Judge Aquilina told Nassar that “Spending four or five days listening to them [the young women he molested] is significantly minor considering the hours of pleasure you had at their expense and ruining their lives.” Judge Aquilina is tough af.

Aly Raisman nailed this one, too. She stared Nassar down and said, “You think this is hard for you? Imagine how all of us feel.” 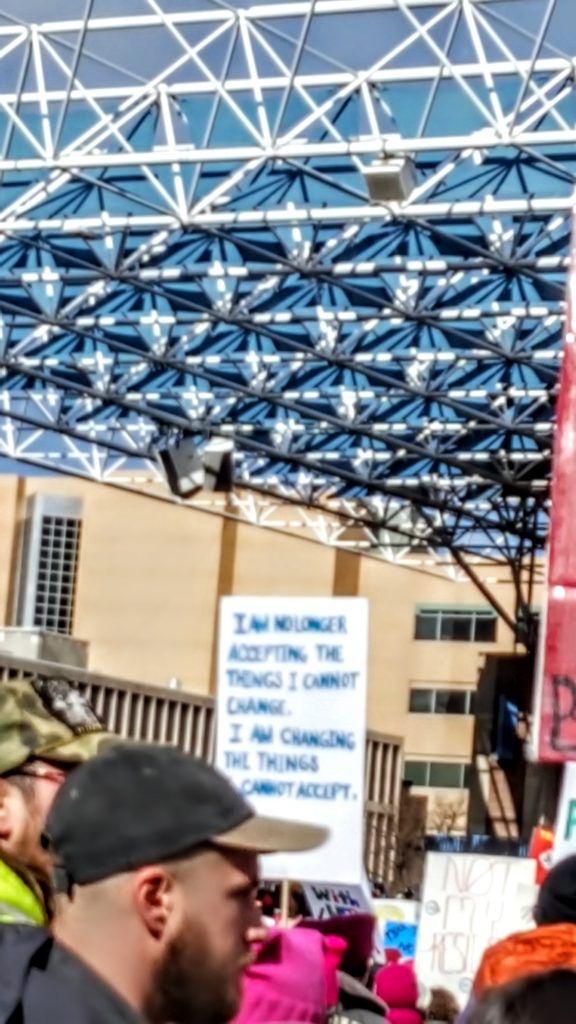 I have to admit that I’m an Olympics junky. I watch all of it, winter and summer, every time. I watch the athletes process in. I watch them light the torch. I tear up when they stand on the podium. I’ve watched curling, canoe slalom, synchronized swimming, luge, bobsled, skeleton, and even that goofy gymnastics thing with ribbons.

Many years ago, though, watching gymnastics used to make me sad. These tiny elite athletes, it turned out, were basically starving themselves while competing at world class levels. It wasn’t enough to twirl twelve thousand  times ten feet in the air in a half-pike position and land with a half-twist and a giant smile. They had to do all of that while meeting their coach’s misogynistic idea of what a female gymnast’s body should  look like.

Eventually, though, that seemed to change. For the last few Olympics, the US women gymnasts started looking more like well-fueled athletes and less like fragile paper dolls. I thought that meant they were being treated better.

I spend my days surrounded by young men and women. I’m pretty good at knowing when to ask a student if something is bothering them. Watching the 2016 Olympics, I kept asking Fred what was wrong with the gymnasts. They were fierce au (is there a social media “au” that means “as usual”?), but the joy and laser concentration that we all fell in love with in 2012 were obviously missing.

Many years ago, a young woman at my school uttered words that changed my life. A group of students had attended a diversity conference and had come back newly empowered with language that allowed them to describe their experiences.

Their stories of being mistreated by classmates were hard to hear, but it was one young woman’s reaction to the faculty’s outrage and outpouring of compassion that changed me. “I had no idea you would help me with this,” she said.

In the courtroom on Friday, Aly Raisman called out the whole organization; she said that USA Gymnastics was “rotting from the inside” and condemned the US Olympic Committee for their silence.

Raisman said, “If over these many years, just one adult listened, and had the courage and character to act, this tragedy could have been avoided.”

Larry Nassar spent at least twenty years abusing the power of his position and molesting young women. Meanwhile, those young women were waiting for just one adult to do something courageous, and no one did.

I know that I am not in charge of keeping the US Olympic Gymnastics team safe from pedophiles. (I point that out in case Sister Therapist happens to be reading–I do know that I can’t save or protect all of them.)

And yet. Maybe instead of blithely celebrating the gymnasts’ Olympic victory, I should have written an essay asking why they didn’t look like they were having fun.

I’m at the point in this essay where I need to decide where I’m going. If I’m to meet my new goal of publishing every Monday, it’s time to wrap this up. I’ve been circling; zigging left, zagging right. But I think I’m closing in.

Last week, Fred and I went to see The Post. I’m not much of a movie critic, but I think people should see this movie. In an age where every leader has to look around and take a poll before they decide what to do, the movie tells the story of one person (just one adult, you might say) who looked inside to find that answer.

Katharine Graham was tough af, too.

The 2016 US Olympics Gymnastic Team named themselves the “Final Five.” Let’s all act like adults to make sure they got that right.