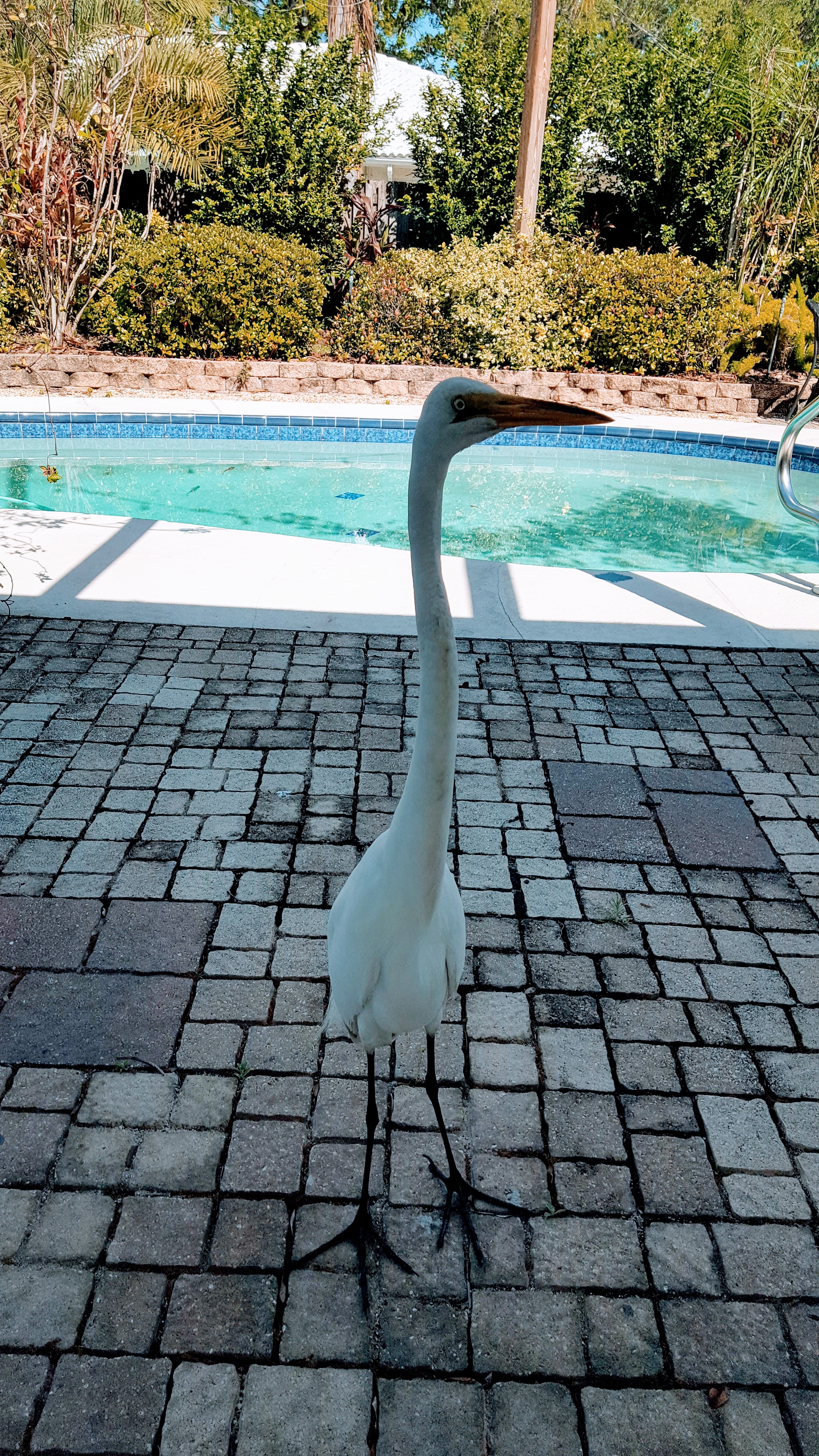 If I were funnier, I’d start this post like a joke: an egret walks into the family room and the dog says…

I’m not that funny, though, and that would give too much away. I want to start further back, maybe with the wood stork.

It was Thursday morning, and Fred and I were visiting our friend Diane in Florida. We’d all gone outside because we saw the muscovy ducks walking around with their babies. The chicks were trailing behind them in a line like an old-fashioned Ugly Duckling pull toy.

If you’ve never seen one, they look like the duck you’d make if you were finished making ducks and had some leftover pieces you didn’t want to waste. The Cornell Laboratory of Ornithology describes the muscovy as a “large heavy-bodied duck with warty red spots on face.”

One of the many charms of Diane’s neighborhood is that the muscovy ducks wander around all the time. Later in the week we’ll find ourselves in a duck jam when the muscovy space themselves evenly across the street, bringing traffic (by which I mean our rental Nissan) to a leisurely halt.

They won’t tell you this at Cornell, but muscovy ducks are flagrant jaywalkers.

Anyway, we were admiring the baby ducks

when we spotted the tall white bird in the water. Egret was the obvious choice, but that didn’t seem quite right. We grabbed the binoculars and took turns noticing details about this bird.

Huge, mostly white, black feathers along each wing, long beak, reddish feet.  We watch him until our coffee grows cold then head in to find him online. In the end, it’s the scaly head that nails it. Wood stork all the way.

I’m not a serious bird watcher, nor do I play one on tv, but I do I come by my fascination with naming birds honestly. My parents kept a bird book on the divider by the kitchen table, and kept a list of every bird they ever saw in the yard for the forty-some years they lived on Marvle Valley.

I have that book and that list somewhere, but I’ll never get to Oscar the Egret if I go look for it now. I do remember that for much of my childhood, they were on a quest to spot a pileated woodpecker.

Here’s the cool thing about that quest–

once they spotted him, they were just as eager to spot him again. I think there’s some sort of lesson about love lurking there, but I promised Oscar I’d write about him, and I’ve already broken one promise to that bird, so I’d best get on with it.

Fred and I leave our friend after the wood stork morning and set off across the state in search of adventure. We find some (another story for another day) and then drive back to the Gulf.

When we return Diane is house-sitting for some neighbors across the street. We join her there and gather in the kitchen to prepare a feast. We’re cooking steak and salmon, roasting corn and asparagus, tossing a salad, and baking potatoes.

The back door is open, and before long Diane lets us know that Oscar the Egret is here. He’s standing right outside the open door.

I’m a sucker for tall birds.

I walk to the door and strike up a conversation. With the S in his neck uncurled, Oscar’s beak hovers about waist level. Oscar stares while I talk to him and start taking pictures. Diane tells us that the owners of this house feed him turkey dogs.

Or in the freezer. We check. But hey, we’re cooking salmon. I tell Oscar to come back later and we’ll save him some. Oscar says, “That sounds good,  but I’ll just wait here, thanks.” He has a very expressive stare.

He also keeps taking steps toward the open door, so in a moment of sanity we close it. We head back into the kitchen to work on dinner.

Diane is drizzling olive oil on the asparagus when we’re startled by wings, a commotion at the window. (According to Cornell, Oscar’s wingspan is anywhere from 4 feet 3 inches to 5 feet 6 inches. Fun fact, mine is 5 feet 4 inches. Fred just measured for me.)

Oscar has flown up onto the windowsill, apparently deciding to oversee our preparations. He’s a little cramped there, so he flaps over to the barbecue where he still has a good view of the salmon.

At some point Oscar gives up on us and flies off,

making it possible for us to have dinner outside on the patio. Good friends, a good Cabernet, a great meal–dinner stretched into the evening and it was late before we all called it a night.

The trouble started the next afternoon. Oscar the Egret came back, looking for the salmon I’d promised him. But the salmon was really, really good. I’d forgotten all about Oscar while I cleaned my plate.

I try to explain this to Oscar, but he isn’t buying it. Or maybe he just figures it’s time to take matters into his own wings. To be honest, I’m not sure exactly what he is thinking when he steps through the doorway into the family room.

While we’re all standing around wondering what to do next, let’s try that joke again. An egret walks into the family room and the dog says…

Nothing. Absolutely nothing. Ginger stands by Diane completely unimpressed. “Giant white bird in the family room. What’s the big deal?” This dog is one cool cat.

Diane saves the day when she remembers we’ve got some leftover steak in the refrigerator. For a moment, we look at each other and wonder if we are really going to feed steak to the egret standing in the family room.

But, seriously, read that sentence again. The egret is standing in the family room.

What choice did we have?

When the steak is in my hand  and Oscar takes a few steps toward me, I realize that I don’t actually know how one feeds an egret. The Cornell Laboratory of Ornithology describes Oscar’s bill as “daggerlike.”

That seems about right. I realize (a little late) that I don’t know if Oscar catches frogs with his beak open or if he stabs them. (Fun fact: the answer is both.)

I panic and toss the steak toward him, and he snaps it out of the air with a speed that would make my golden retriever sit up and applaud. Diane’s dog, on the other hand, is enjoying his own leftover steak and ignores Oscar.

The giant egret runs outside to dunk the steak in the pool before he eats it. Of course, if you feed an egret one piece of steak in the family room, most of you can probably guess what happens next.

I’ll give you a hint.

I’m still trying to process the fact that I was just standing in the family room with a giant egret when Oscar runs back in. I toss another piece of steak, Oscar dunks it in the pool, and back he comes.

This goes on for a few rounds before we come to our senses and make a move for the door when Oscar heads for the pool. He looks at us indignantly through the glass, just like a dog when you won’t throw the ball the twenty-seventh time.

So there you have it: my close encounter of the egret kind. The rest of the trip was fairly uneventful after that.

First, it worries me that I might be misspelling Oscar’s name. Now that I’ve gotten to know him a little, I think he’s more of an “Oskar”–there was something Germanic in that egret’s intense stare.

Second, to my friends who interact with wildlife outdoors, I want to reassure you that I do know better than to feed the wildlife. I would like to say that I’ll never do that again, but if a giant bird is standing in the family room, I might not be able to keep that promise.

Third, if you look up “egret poems,” you’ll get a lot of poems about “regret” instead. That might have been useful if Oscar had indeed speared my hand with his “daggerlike bill,” but that didn’t happen. The whole encounter left me feeling touched by wonder.

Finally, after you wade through the poems about regret, you’ll find this thought, tucked away in Mary Oliver’s poem, “Mysteries, Four of the Simple Ones.” Oliver asks,

“And what else can we do when the mysteries present themselves
but hope to pluck from the basket the brisk words
that will applaud them…?”

Well, I’ve got one idea.

4 Replies to “Adventures in Bird Watching #1: Meet Oscar the Egret”